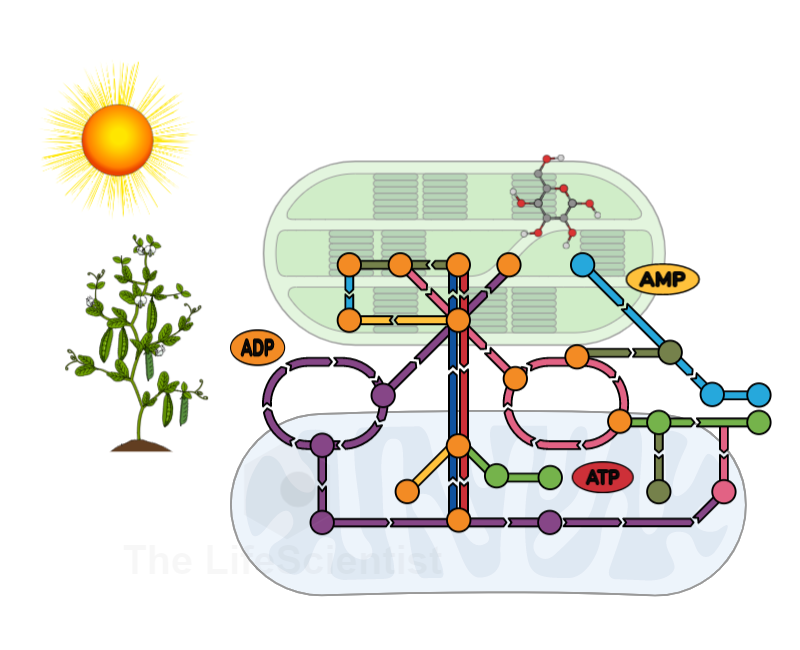 Metabolism is of two types (i) Anabolism and (ii) Catabolism.

Anabolism (Constructive Metabolism): It is the set of metabolic or biochemical pathways that construct different complex molecules from smaller units and are also called “building up” reactions. Example: Synthesis of an organic compound such as sugar using H2O and CO2 during photosynthesis, synthesis of protein from 20 different amino acids, and synthesis of starch from glucose monomers. Energy is stored as potential energy during the anabolic process. The anabolic process is required for the growth and development of an organism.

Catabolism (Destructive Metabolism): It is the set of metabolic or biochemical pathways that involves the breaking of complex molecules and substances into a smaller and simple form. Upon breakdown, the potential energy stored in the molecules is converted into kinetic energy. Example: Polysaccharides such as starch (plants) and glycogen (animals) are degraded into simple sugars such as glucose, breakdown of sugar molecules during respiration. Breakdown of sugar releases energy in the form of ATP. Proteins are degraded into different amino acids and fats are degraded into fatty acids and glycerol.

The metabolism (anabolism and catabolism) of an organism can be affected due to external or environmental factors such as light, temperature, pollution, environmental toxin, and internal factor such as stress, diseases as well as genetic factor. Inborn errors of metabolism are rare genetic disorders that arise due to change in DNA sequence or mutation in a protein-coding or enzyme coding gene. Due to which the body synthesized nonfunctional proteins (enzymes) that unable to break down or metabolize food or parts of food. Example:  Phenylketonuria is caused due to mutation in the enzyme, phenylalanine hydroxylase which results in decreased metabolism of the amino acid phenylalanine.